Radical French Thought and the Return of the “Jewish Question” 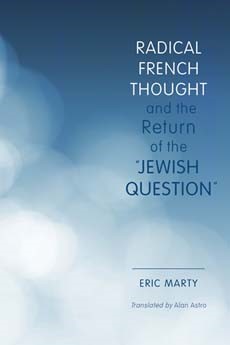 For English-speaking readers, this book serves as an introduction to an important French intellectual whose work, especially on the issues of antisemitism and anti-Zionism, runs counter to the hostility shown toward Jews by some representatives of contemporary critical theory. It presents for the first time in English five essays by Éric Marty, previously published in France, with a new preface by the author addressed to his American readers. The focus of these essays is the debate in France and elsewhere in Europe concerning the "Jew.” The first essay on Jean Genet, one of postwar France’s most important literary figures, investigates the nature of Genet’s virulent antisemitism and hatred of Israel and its significance for an understanding of contemporary phenomena. The curious reappearance of St. Paul in theological and political discourse is discussed in another essay, which describes and analyses the interest that secular writers of the far left have shown in Paul’s “universalism” placed over and against Jewish or Israeli particularism. The remaining essays are more polemical in nature and confront the anti-Israeli attacks by Alain Badiou and Gilles Deleuze.