Karl Pfeifer in Conversation with Cary Nelson and Deborah Hartmann

Memories of Veteran and Holocaust Survivor Karl Pfeifer - Part I

In Conversation with Günther Jikeli and Students of Indiana University

Part 1: Escaping Hungary in 1943 and Fighting Israel’s War of Independence in 1948

In Conversation with Günther Jikeli and Students of Indiana University 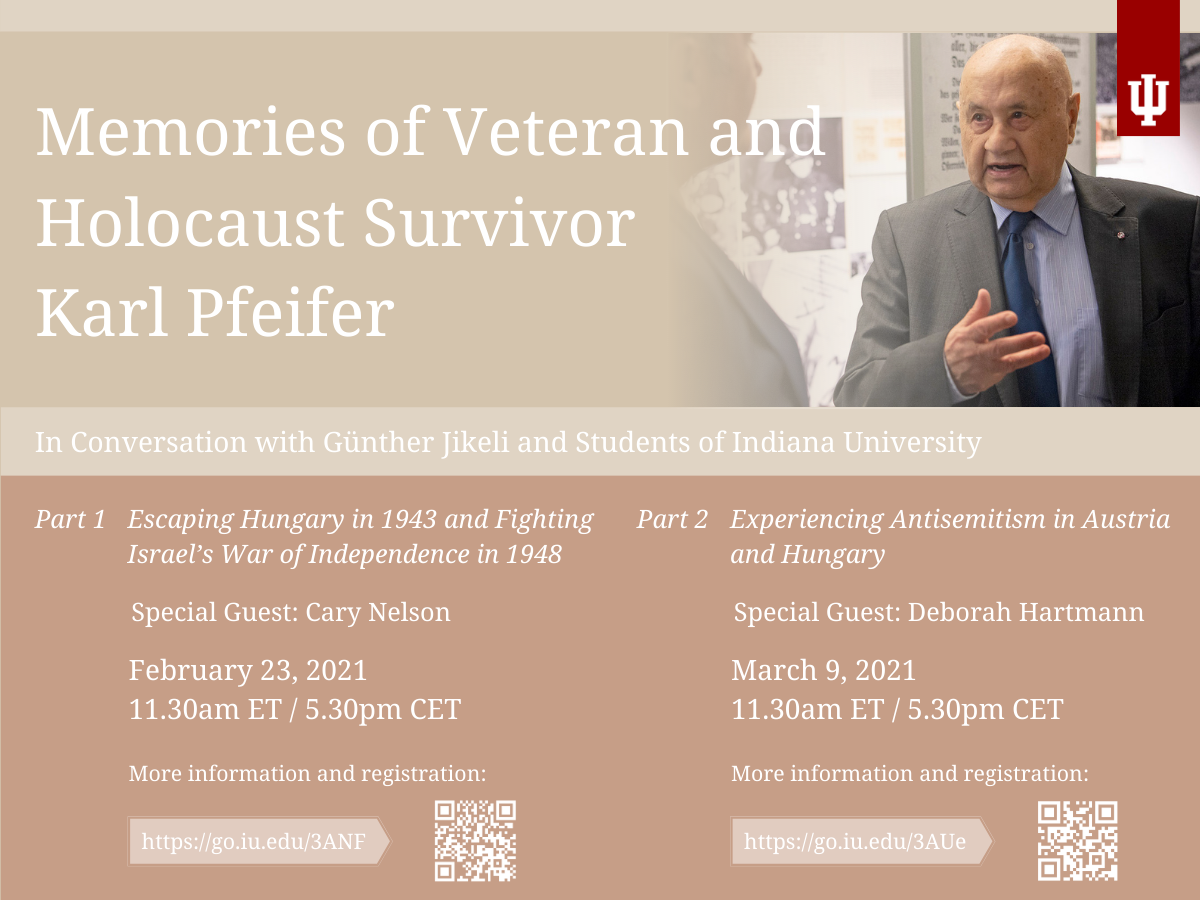 In 1938, Karl Pfeifer and his parents fled from Austria to Hungary, where he joined the Zionist youth organization, Hashomer Hatzair in 1940. He was able to escape from Hungary in January 1943 as one of 50 children who traveled to Palestine. There he lived in a kibbutz, served in the elite striking force Palmach, and - after the foundation of Israel - in the Israeli army until 1950. In 1951, he returned to Austria. From 1982 to 1995, he was the editor of the “Gemeinde,” the official publication of the Jewish community in Vienna. He worked as a free-lance correspondent for the Israeli radio station, Kol Ysrael’s foreign affairs show from 1990 to 2005. Karl Pfeifer has been working as a journalist ever since, often denouncing antisemitic and antidemocratic tendencies in the communist Hungarian regime at the time or the far-right authoritarian regime of today, far-right intellectuals in Germany and Austria, and antisemitism from the left. Karl Pfeifer is the recipient of the Golden Decoration of Honor for Services to the Republic of Austria (2018), Austria’s most important official decoration.

The documentary about his life, “Zwischen allen Stühlen. Lebenswege des Journalisten Karl Pfeifer” [Sitting On The Fence. The life paths of the journalist Karl Pfeifer] is available at https://vimeo.com/124834106 [German with English subtitles].

He is the author of

Cary Nelson is Jubilee Professor of Liberal Arts & Sciences and Professor Emeritus of English at the University of Illinois at Urbana-Champaign and the author or editor of 35 books, including The Case against Academic Boycotts of Israel (Wayne State University Press 2015) and Israel Denial: Anti-Zionism, Anti-Semitism, & the Faculty Campaign against the Jewish State (Indiana University Press 2019). Peace and Faith: Christian Churches and the Israel-Palestinian Conflict is forthcoming in May. His latest book is Not in Kansas Anymore: Academic Freedom in Palestinian Universities, published by the Academic Engagement Network and distributed by Academic Studies Press in 2021.

Deborah Hartmann is the new Director of the House of the Wannsee Conference, a memorial and educational site in Berlin, Germany. Prior to that, from 2015 to 2020, she headed the German-language education department at Yad Vashem and from 2011 to 2014, served as the representative of Yad Vashem’s educational department for German-speaking countries, based in Berlin. Deborah Hartmann taught at the University of Vienna and published on the topics of remembrance culture and Holocaust education in various journals and anthologies.

Günther Jikeli, historian and sociologist, holds the Erna B. Rosenfeld Professorship at the Institute for the Study of Contemporary Antisemitism/ Borns Jewish Studies Program at Indiana University. He is an associate professor at Germanic Studies and Jewish Studies. He is a permanent fellow at the Moses Mendelssohn Center at Potsdam University. Together with Olaf Gloeckner he published The New Unease. Antisemitism in Germany Today [in German] in 2019.

This event is co-hosted by Indiana University’s Institute for the Study of Contemporary Antisemitism, IU’s Department of Germanic Studies, the IU Europe Gateway and the Memorial and Educational Site House of the Wannsee Conference. It is sponsored by the Academic Engagement Network.