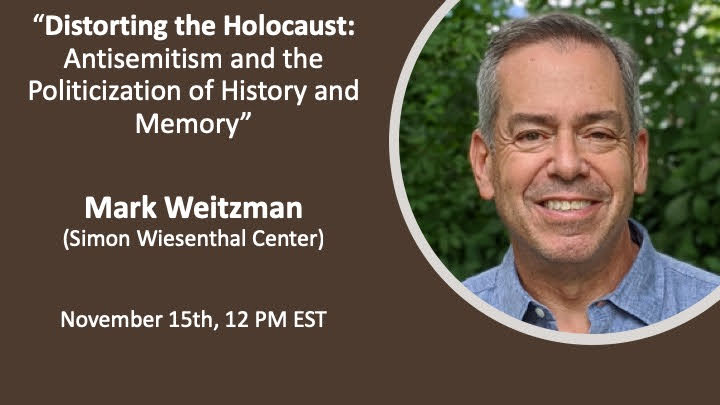 Distorting the Holocaust: Antisemitism and the Politicization of History and Memory

75 years after the end of World War II Holocaust Denial and Distortion is a growing problem, and in some countries has even become official government policy. In this presentation Mark Weitzman traced the roots of denial and distortion and present an overview of the situation today, focusing on how the history of the Holocaust is being rewritten by nationalist apologists, political opportunists and how this message is spread online. He also discussed a variety of initiatives (including some from personal experience) both from civil society, governments and intergovernmental organizations aimed at combating Holocaust denial and distortion, including the IHRA Working Definition of Holocaust Denial and Distortion.


Mark Weitzman is director of government affairs for the Simon Wiesenthal Center. He is a member of the official U.S. delegation to the International Holocaust Remembrance Authority (IHRA), where he chaired the Committee on Antisemitism and Holocaust Denial and is currently chairing the Museums and Memorials Working Group. He was the architect of IHRA’s adoption of the Working Definition of Antisemitism, which is the first definition of antisemitism with any formal status and the lead author of IHRA’s Working Definition of Holocaust Denial and Distortion. Mr. Weitzman is a participant in the program on Religion and Foreign Policy of the Council on Foreign Relations, served as a member of the advisory panel of Experts on Freedom of Religion or Belief of the Organization for Security and Co-operation in Europe (OSCE), and co-chaired the Working Group on International Affairs of the Global Forum on Antisemitism. He currently serves as the Vice President of the Association of Holocaust organizations. Mr. Weitzman is co-editing the Routledge History of Antisemitism, scheduled for publication in 2021. He was a winner of the 2007 National Jewish Book Award for best anthology for Antisemitism, the Generic Hatred: Essays in Memory of Simon Wiesenthal. Among his other publications are Jews and Judaism in the Political Theology of Radical Catholic Traditionalists which was published by the Vidal Sassoon Center for the Study of Antisemitism at the Hebrew University in 2015 and the articles “Every Sane Thinker Must Be an Anti-Semite”: Antisemitism and Holocaust Denial in the Theology of Radical Catholic Traditionalists which appeared in the volume Antisemitism Before and Since the Holocaust: Altered Contexts and Recent Perspectives (2017, edited by Anthony McElligott and Jeffrey Herf) and “Antisemitism and the Radical Catholic Traditionalist Movement” in the volume Deciphering the “New” Antisemitism, (2015, edited by Alvin Rosenfeld). He was a coauthor of An End to Antisemitism! A Catalogue of Policies to Combat Antisemitism that was presented to the European Union in 2019. He also served as a member of the Advisory Expert Group of the joint OSCE/UNESCO publication Addressing Antisemitism through Education: Guidelines for Policymakers (2018). His works have been translated into many languages including Arabic, French, German, Japanese, Russian and Spanish. Mr. Weitzman has testified in the U.S. Congress, met with world leaders including UN Secretary-Generals Kofi Annan, Ban Ki-moon and Antonio Guterres and been a featured speaker at three UN conferences on antisemitism and extremism. He has lectured and presented at international political and scholarly conferences throughout North America, Europe and Israel, as well as in South America, Africa and Australia and is a frequent media commentator on issues related to antisemitism, extremism and tolerance.


Back to Webinar Program